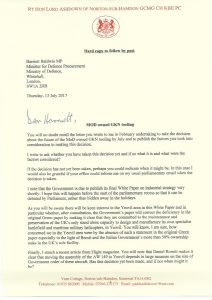 Lord Paddy Ashdown has secured the first question in the House of Lords for a Government Minster to answer the question:

“to ask Her Majesty’s Government whether they intend to retain the Government-owned tooling and jigs for the A159 Wildcat helicopter within the United Kingdom; and if so, whether these will be installed in the main Leonardo site.”

The Question will be answered on the first day the House of Lord returns from the New Year on Monday 9 January at 2.30pm.

1737 was a turbulent year. An earthquake near Japan set a Tsunami wave 200 feet high sweeping across the Pacific. A tropical cyclone in Bengal killed 300,000 people. The world’s first opera house was opened in Naples. Benjamin created the first police force in the US. Thomas Paine, the man who inspired both the French and American Revolutions with his ground breaking book “The Rights of Man”, was born. And what is claimed to be the world’s first daily English language newspaper, the Belfast Newsletter was founded.

Never comfortable with being behind the times, our local community saw its first local newspaper appear that year too. It was published by a Sherborne printer called Robert Goadsby and was called The Sherborne Mercury. Later it became The Sherborne and Yeovil Mercury – and later still The Western Flying Post (don’t you just love that title? – you can almost hear the post horn sounding as it’s delivered to Yeovil on the local coach galloping down Babylon Hill). Today it has become our own local and much loved (and just very occasionally, not) Western Gazette, whose 275th birthday is this year.

Two Hundred and seventy five years! That’s a quarter of the time since the Norman invasion! There are very few newspapers who can trace their lineage back that far – and I suspect even fewer who can boast an equivalent record when it comes to keeping people informed about what is happening in their own community.

We have many things to be proud of in South Somerset and West Dorset. Our incomparable countryside; our strong communities; our remarkable people; our tough and resilient industries. But one of those local assets of which we should be proudest is a local newspaper which has, for so long, made such a remarkable contribution to our local life.