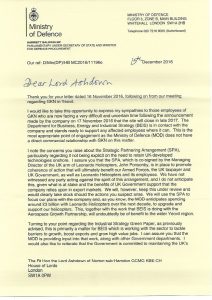 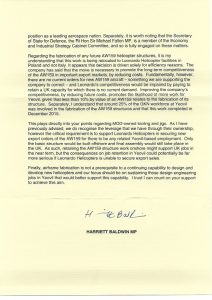 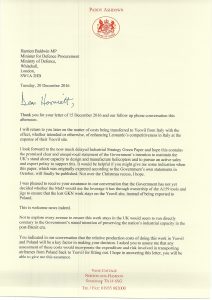 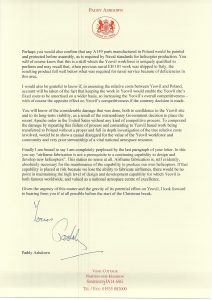 Thank you for your letter of 15 December 2016 and our follow up phone conversation this afternoon.

I will return to you later on the matter of costs being transferred to Yeovil from Italy with the effect, whether intended or otherwise, of enhancing Leonardo’s competitiveness in Italy at the expense of their Yeovil site.

I look forward to the now much delayed Industrial Strategy Green Paper and hope this contains the promised clear and unequivocal statement of the Government’s intention to maintain the UK’s stand alone capacity to design and manufacture helicopters and to pursue an active sales and export policy to support this. It would be helpful if you might give me some indication when this paper, which was originally expected according to the Government’s own statements in October, will finally be published. Not over the Christmas recess, I hope.

I was pleased to receive your assurance in our conversation that the Government has not yet decided whether the MoD would use the leverage it has through ownership of the A159 tools and jigs to ensure that the lost GKN work stays on the Yeovil site, instead of being exported to Poland.

This is welcome news indeed.

Not to explore every avenue to ensure this work stays in the UK would seem to run directly contrary to the Government’s stated intention of preserving the nation’s industrial capacity in the post-Brexit era.

You indicated in our conversation that the relative production costs of doing this work in Yeovil and Poland will be a key factor in making your decision. I asked you to assure me that any assessment of these costs would incorporate the expenditure and risk involved in transporting airframes from Poland back to Yeovil for fitting out. I hope in answering this letter, you will be able to give me this assurance.

Perhaps you would also confirm that any A159 parts manufactured in Poland would be painted and protected before assembly, as is required by Naval standards for helicopter production. You will of course know that this is a skill which the Yeovil workforce is uniquely qualified to perform and may recall that, when previous naval EH 101 work was shipped to Italy, the resulting product fell well below what was required for naval service because of deficiencies in this area.

I would also be grateful to know if, in assessing the relative costs between Yeovil and Poland, account will be taken of the fact that keeping the work in Yeovil would enable the Yeovil site’s fixed costs to be amortised on a wider basis, so increasing the Yeovil’s overall competitiveness – with of course the opposite effect on Yeovil’s competitiveness if the contrary decision is made.

You will know of the considerable damage that was done, both to confidence in the Yeovil site and to its long-term viability, as a result of the extraordinary Government decision to place the recent Apache order in the United Sates without any kind of competitive process. To compound the damage by repeating this failure of process and consenting to Yeovil based work being transferred to Poland without a proper and full in depth investigation of the true relative costs involved, would be to show a casual disregard for the value of the Yeovil workforce and community and very poor stewardship of a vital national aerospace resource.

Finally I am bound to say I am completely perplexed by the last paragraph of your letter. In this you say “airframe fabrication is not a prerequisite to a continuing capability to design and develop new helicopters”. This makes no sense at all. Airframe fabrication is, self evidently, absolutely necessary for the maintenance of the capability to produce our own helicopters. If that capability is placed at risk because we lose the ability to fabricate airframes, there would be no point in maintaining the high level of design and development capability for which Yeovil is both famous worldwide, and valued as a national aerospace centre of excellence.

Given the urgency of this matter and the gravity of its potential effect on Yeovil, I look forward to hearing from you if at all possible before the start of the Christmas break.