Thank you for your letter of yesterday.

I am glad that you have now agreed that the AW159 tools and jigs will not be allowed to leave the Yeovil site for Poland unless and until there is a full in-depth study of the comparative costs of production on the two sites and that this will involve all relevant factors, such as the impact on the overheads of Leonardo’s Yeovil site, the costs both of transporting the tools and jigs to Poland and of transporting the assembled AW159 airframes back from Poland back to Yeovil for fitting out.

I am grateful to you for finally giving this undertaking which will, I know be welcomed, not just by the Leonardo workforce, but also by the Yeovil community at large. I also welcome this change of policy in favour of a proper competitive process, rather than repeating the procedure which applied when the Government foolishly gave the recent Apache order to the United States without any kind of tendering process.

One simple question. Given how much locally and nationally depends on this decision (not least because of what happened over the Apache order) I am sure you will agree with me that the Government should be as transparent about its forthcoming decision on the tools and jigs as possible. Of course I realise that the details of the relative costs which are incorporated into your decision cannot not be made public as they will be commercially confidential. But I hope you will be able, at the very least, to agree that, when you announce the decision, you will also make public the broad list of the factors which have been taken into account.

I would be most grateful if you would provide me with confirmation that you have no difficulty with publishing such a list at the appropriate time.

I have finally to express my surprise (and concern) that you have not been able to be more specific about the inclusion of a commitment to maintain a UK stand-alone ability to make helicopters, in the forthcoming and long awaited Industrial strategy. Given that our ability to make helicopters is a vital part of the nation’s aerospace industrial base, I am bewildered that you seem unable to give a clear answer to this crucial question at this late stage in the publication of the forthcoming White Paper. I am sure you will understand that the absence of such a
commitment, when the White Paper is finally published, will be treated with shock, even anger, in the Yeovil area and far beyond.

I look forward to hearing from you.
Paddy Ashdown 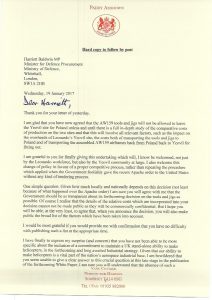 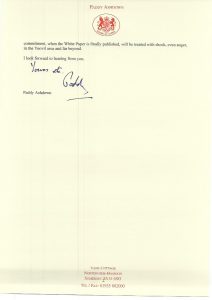 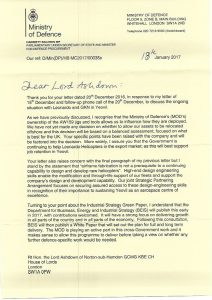 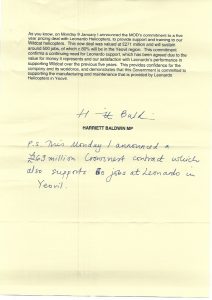